FedEx told TechCrunch that the bots were there for a preview party for its Small Business Saturday event and are not testing in New York. Even this promotional event was too much for city officials concerned with congestion and bots taking jobs from humans.

After reports of the bot sightings, the mayor tweeted that FedEx didn’t receive permission to deploy the robots; he also criticized the company for using a bot to perform a task that a New Yorker could do. The New York Department of Transportation has sent FedEx a cease-and-desist order to stop operations the bots,  which TechCrunch has viewed.

The letter informs FedEx that its bots violate several vehicle and traffic laws, including that motor vehicles are prohibited on sidewalks. Vehicles that receive approval to operate on sidewalks must receive a special exemption and be registered.

First of all, @FedEx, never get a robot to do a New Yorker’s job. We have the finest workers in the world.

Second of all, we didn’t grant permission for these to clog up our streets. If we see ANY of these bots we’ll send them packing. https://patch.com/new-york/new-york-city/see-fedexs-package-robots-roll-through-streets-nyc …

New Yorkers have lots of questions about SameBot. Among them: Does it also get its own street lane and how long until NYC kills it?

FedEx first unveiled its SameDay Bot in February 2019. The company said at the time it planned to work with AutoZone, Lowe’s, Pizza Hut,  Target, Walgreens and Walmart to figure out how autonomous robots might fit into its delivery business. The idea was for FedEx to provide a way for retailers to accept orders from nearby customers and deliver them by bot directly to customers’ homes or businesses the same day.

FedEx said its initials test would involve deliveries between selected FedEx Office locations. Ultimately, the FedEx bot will complement the FedEx SameDay City service, which operates in 32 markets and 1,900 cities.

The company has tested the bots in Memphis, Tennessee as well as Plano and Frisco, Texas and Manchester, New Hampshire, according to a spokesperson.

Wall-E out here flexing all over FedEx delivery drivers #whatisnewyork 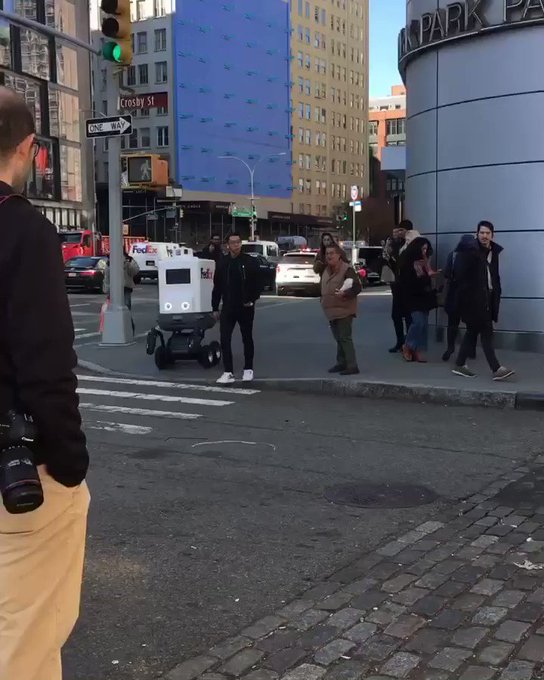 The underlying roots of the SameDay Bot is the iBot. The FedEx bot was developed in collaboration with DEKA Development & Research Corp. and its founder Dean Kamen  who invented the Segway  and iBot wheelchair.

DEKA built upon the power base of the iBot, an FDA-approved mobility device for the disabled population, to develop FedEx’s product.

The FedEx bot is equipped with sensing technology such as LiDAR and multiple cameras, which when combined with machine learning algorithms should allow the device to detect and avoid obstacles and plot a safe path, all while following the rules of the road (or sidewalk).