Mark Zuckerberg had a face-to-face meeting with President Donald Trump in the White House last week, and if the current view from technology executives is any indication, it was a wise move: The Facebook CEO can use all the friends he can get in the nation’s capital as antitrust scrutiny increases.

More than half of technology executives (55%) recently surveyed by CNBC believe Facebook is the most likely to face punitive action as a result of the federal government’s antitrust review of Silicon Valley and technology corporate giants, which also includes Alphabet and Amazon.

Technology executive sentiment on Alphabet’s antitrust outlook was less pessimistic, according to results of the third-quarter 2019 survey of the CNBC Technology Executive Council. Roughly 17% of tech executives said the Google parent was the most likely to face punitive action — tied with the percentage of respondents who said none of the three tech giants would suffer punishment. Only 7% of survey respondents said Amazon, the technology company Trump has spent the most time criticizing, was the most likely to be hit hard.

A little less than half of tech executives (47%) support antitrust investigations at the federal and state level, while 28% told CNBC they oppose the investigations.

The Q3 2019 survey of the CNBC Technology Executive Council, which represents a diverse set of senior-level technology executives at companies and organizations across all sectors of the economy, was conducted from Sept. 9–Sept. 22 among 54 council members.

Which big tech company do you think is most likely to face punitive action? 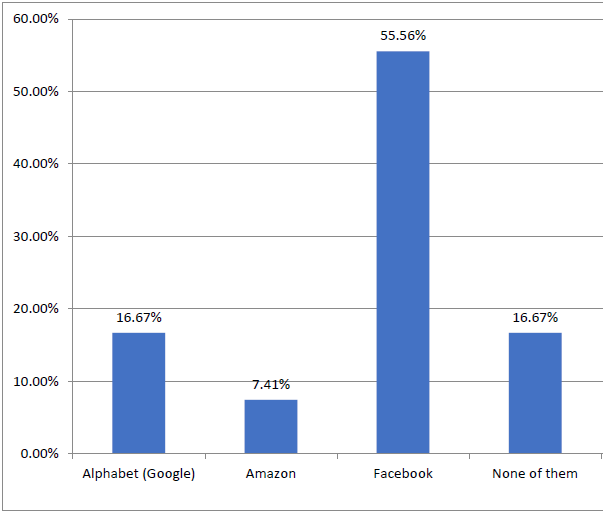 There is widespread belief that Facebook has not done a good job handling its regulatory and PR issues since the 2016 election fallout, and the company has engendered a lack of trust among the public when it comes to promises and the representations by company management.

Wendy Pfeiffer, chief information officer of Nutanix and a member of the CNBC Technology Executive Council, said Facebook has not done itself any favors.

“Initially providing inadequate transparency to its consumers about the collection and use of their private data, and ultimately being caught out in public hearings around a series of omissions and subtle but significant misrepresentations of how its technology engine functions and is managed. The resulting modern-day Tech Inquisition finds Facebook as the easiest target and, like most complex systems, the image/PR issues persist, simply because they have some basis in truth.”

On Thursday, Reuters reported that the U.S. Justice Department would open an antitrust investigation of Facebook, citing anonymous sources, which would be the fourth simultaneous government antitrust review of the social media company.

One problem for Facebook is the difficulty people have understanding how it really works, a “black box” issue that is exacerbated by the privacy issues. Postings on social media and communications with others can hit closer to home for some people than search or purchasing history, though that reality may not have significance in an antitrust law context.

“Facebook is the world’s foremost social media network, it has extraordinary reach and influence, and it impacts billions of consumers worldwide. It is therefore held to a higher public standard, and opinions, expectations and reactions are so much greater than for other enterprise or consumer companies,” said Kirsten Wolberg, chief technology and operations officer at DocuSign and a member of the CNBC Technology Executive Council.

“Ultimately, opaque technical operations lead to superstition and fear,” Pfeiffer said. “They are the modern-day equivalent of medieval society’s fear of the ‘sorcery’ of Galileo, Copernicus, Kepler and Newton. Among these companies, Facebook has significantly been the most opaque to rank-and-file consumers about its technology and use of data.”

The way the Facebook business is structured does pose potentially greater risks.

Amazon squeezing competition or Google favoring its own affiliates in search results could be addressed by tweaks to business models. Facebook, by contrast, is more likely to face divestitures of important assets acquired by acquisition, such as Instagram and Whatsapp, as well as restrictions on future acquisitions and stringent privacy requirements.

Do you support or oppose investigations into big tech companies? 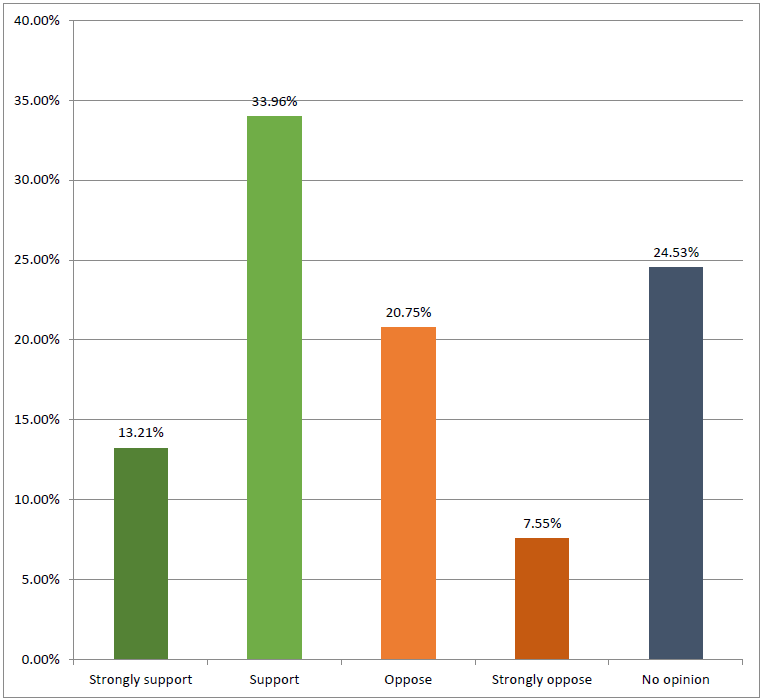 Harry First, law professor at NYU and former Chief of the Antitrust Bureau of the Office of the Attorney General of the State of New York, said there are a host of reasons that Facebook’s antitrust outlook would seem bad, including its negative PR, leadership mistakes and the fact that it has been under a microscope in recent years.

First suggested technology executives also may know more than the general public about Facebook’s “hardball tactics,” referencing a story in Tuesday’s Wall Street Journal about how Snap and companies that compete with Facebook are airing grievances to the Federal Trade Commission. The Snap legal team kept a dossier for years on Facebook’s attempts to stifle the competition, called “Project Voldemort,” according to the WSJ report.

Michael Carrier, an antitrust expert and professor of law at Rutgers University, said it is logical Facebook is viewed as being in the most trouble, because of a combination of its role in the 2016 election, its control over data — along with privacy concerns — and its status as more of an optional platform than the essential services performed by Google (internet search) and Amazon (online shopping). Carrier also cited Facebook leadership’s inability to get out ahead of the issue.

But he stressed that it is early in the antitrust investigations, and they could take years. “More facts will come out that could change this. If, for example, Google or Amazon are charged with taking actions that hurt consumers and have no reason other than keeping rivals off the market, that could have an effect. But for now, Facebook is at the top of the list.”

Antitrust experts and technology executives agreed that no tech giant, especially Alphabet, should be too confident about escaping a harsh antitrust outcome.

NYU’s First said, “I think that Google is the most likely target, in part because Google has already been a target of enforcement in Europe, with three cases and large fines, in part because a monopoly in ‘search’ will be easier to prove, and in part because I think there may be more vulnerability in how they price and place their advertising.”

“I think it is related more to the PR issues, more attention and Zuckerberg interactions with Congress, without really having yet addressed the fundamental issues,” said Michael Gioja senior vice president of IT and product development at Paychex and a member of the CNBC Technology Executive Council. “My sense is Alphabet/Google will pop up soon enough on Congress’s radar with a more direct, focused approach.”

Amazon and Apple — which has attempted to distance itself from tech rivals in the public relations war but faces scrutiny of its App Store — should be concerned as well.

“If the agencies focus in on biasing search results to favor the platform owner, then Amazon and Apple will also be vulnerable in a way that Facebook is not,” First said.

“The technologies at the core of behemoths Alphabet and Amazon are far more complex, advancing exponentially through the application of AI/ML, and have the potential to have far more ubiquitous access to consumer data and enabling technologies (such as e-commerce, autonomous vehicles, content targeting, etc.) than Facebook,” Pfeiffer said.

Government’s antitrust case will be hard to make

There is a good reason the second-most popular response from survey takers was that none of the tech giants face punitive action.

The government has to prove its case legally for any of Silicon Valley’s big tech firms to face any punitive action. “That won’t be easy to do,” First said.

“It is very unlikely that the investigations of the tech platforms today will have as big an impact [as the Microsoft antitrust case],” said Doug Melamed, Stanford University law professor. “None of the allegations I have heard suggests antitrust remedies that might fundamentally change the business models of the platforms. Their ability to migrate market power into adjacent markets — verticals for Google or product sales for Amazon — might be inhibited by antitrust remedies, but those changes do not affect the core business models.”

Melamed said that the Microsoft case was important for many reasons.

It demonstrated antitrust laws could be effectively applied to technology industries and to competition for products which are distributed and sold with no monetary price.

It introduced to the law important concepts, like network effects, that were hotly disputed at the time but are now universally accepted.

It established that an existing monopoly can illegally maintain its monopoly by anticompetitive conduct that reduces the likelihood of competition in the future, even without proof of what that competition would look like.

He does not envision the current antitrust review rising to that level, but he conceded, “As with Microsoft, any nontrivial remedies could affect the evolution of the industry in ways we cannot envision.”